1. Fairway North – Have your own swim-up bar.

2. Artevilla – Next to Pauoa Beach

3. Hale Nana Kohola – Watch the whales from this home

1. Beach Villas at Kahaluu – Right next to Turtle beach

3 Best Locations on the Big Island to stay

There are more than 9,700 guest rooms on the island (including more than 600 vacation rentals)

Looking for a place to stay on the Big Island? “The Orchid Isle” has accommodations of every kind, from luxury hotels to bed & breakfast cottages. No doubt you’ll find a number of accommodations tailored to your needs, desires, and budget.

Due to the Big Island large size, choosing a location near sightseeing, attractions, activities and other things you’d like to do becomes important. You don’t want to spend the majority of your vacation in a car! If there are several areas you would like to see, we suggest arranging multiple accommodations around the island.

For the finest in luxury resorts, head to the Kohala Coast, located at the northern end of the Big Island’s western coast. Often referred to as “The Gold Coast,” Kohala is a sunny and arid region offering a good number of luxury hotels set in four resort areas. World-class golf, award-winning beaches, and fine dining are among the amenities here.

The highest concentration of visitor rooms is located in Kailua-Kona on the island’s west side. This bustling vacation town offers a mix of upscale properties, budget hotels and motels, condominiums, rental homes, hostels, and bed & breakfasts.

Tip: It gets really tough trying to find a room here during mid-October, when Kailua-Kona hosts the Ironman Triathlon World Championship.

There are a number of lodging options near Hawaii Volcanoes National Park, the Big Island’s most popular visitor attraction. Volcano Village offers a variety of bed & breakfasts and rental cabins.

On the Big Island’s east side is historic Hilo town

Hilo offers a pair of moderately priced hotels as well as some condominiums, bed & breakfasts, hostels, and rental homes. Most of these accommodations are clustered along Banyan Drive, an oceanfront roadway famous for its string of banyan trees that were planted by numerous celebrities, including Franklin D. Roosevelt, Babe Ruth, Amelia Earhart, Cecil B. de Mille, King George V, and Richard Nixon. Another tip: Book your reservations early if you want to stay in Hilo during the week after Easter Sunday. That’s when the Merrie Monarch Festival—the world’s most prestigious hula event—takes place in Hilo.

North Shore is home to the plantation town

Upcountry has a cooler climate and ranchlands

Finally, head upcountry to the ranchlands of Waimea. The lodgings here are primarily bed & breakfasts and small hotels.

The Bungalows at Mauna Lani Bay 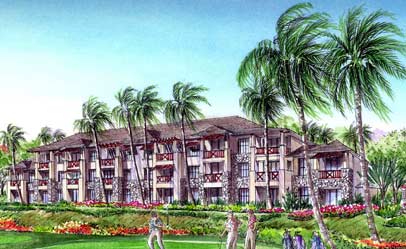