The most spectacular views in Hawaii are just below the ocean’s surface.

Tip: there are great snorkeling spots on every island.

The most popular snorkeling destination in the state is probably Hanauma Bay Nature Preserve on Oahu. Situated on the island’s southeast coast, Hanauma Bay is sheltered from strong currents and waves, making it an ideal spot for snorkeling. This isn’t exactly one of Hawaii’s best-kept secrets, however. About 3,000 visitors flock to the bay every day.

Other good snorkeling spots on Oahu include Queen’s Beach in Waikiki and Shark’s Cove at Pupukea Beach Park on the North Shore. Shark’s Cove is a lava-edged pool filled with rainbow-colored tropical fish. 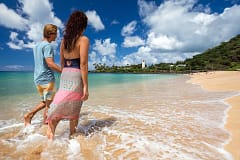 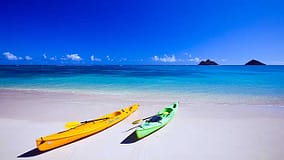 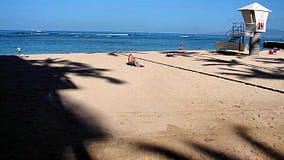 Other recommended snorkeling adventures on Maui can be found at Kapalua Bay, Honolua Beach and the legendary Black Rock in Kaanapali.

The island of Lanai is renowned as one of the world’s premier snorkeling destinations. Head to Hulopoe Beach, where the best snorkeling is between the beach’s eastern point and the center of the bay (where the reef is most developed).

The Big Island offers a number of snorkeling spots. The best of them all might be Kealakekua Bay, a protected marine sanctuary filled with ocean life. Kealakekua Bay is accessible via boat charters.

The island of Kauai also has a nice array of snorkeling opportunities. Favorite spots include Poipu Beach Park on the island’s south shore and Anini Beach on the north shore.

The Complete Hawaiian Reef Fish Coloring Book by Monika Mira is the winner of the Dr. Toy Best Vacation Children’s Products Award and the Creative Child Magazine 2010 Book of the Year Award. The book is recommended by Save Our Seas, and is a great way to get your kids interested in science while on your Hawaii vacation.